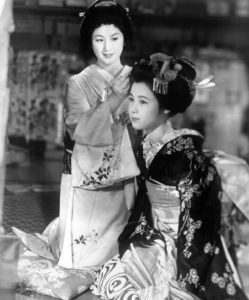 Enjoy two films for the price of one! A Geisha screens at 2pm, followed by The Sea is Watching at 4pm.

A Geisha
(Gion Bayashi)
Sixteen year-old Eiko seeks out the geisha Miyoharu in the district of Gion, in Kyoto, asking to become her “maiko,” or apprentice.

The Sea is Watching
(Umi Wa Miteita)
Set in a 19th century brothel, a prostitute gives refuge to a disgraced samurai and then begins to fall in love with him.