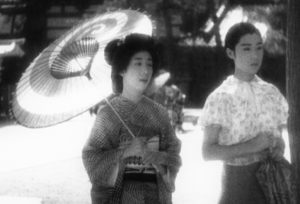 Enjoy two films for the price of one! Sisters of the Gion screens at 2pm, followed by The Life of Oharu at 3:45pm.

Sisters of the Gion
(Gion No Shimai)
Two geisha sisters lead a hard life in the Gion district of Kyoto. After one of them feels obliged to support a bankrupt businessman, the other sets up various schemes to get rid of him.

The Life of Oharu
(Saikaku Ichidai Onna)
Oharu falls in love with a man below her station and shames her family. She fights for dignity and survival, despite the cruelty of society.

One thought on “2 for 1 Films: Sisters of the Gion & The Life of Oharu”