Step back in time to the eighteenth century and the lives of the Schuyler family in their Georgian Mansion overlooking the Hudson River. The Schuylers were a prominent Dutch family in New York in the eighteenth and nineteenth centuries whose descendants played a central role in the formation of the United States. Philip Schuyler, the renowned Revolutionary War General, U.S. Senator, and business entrepreneur, and his wife, Catherine Van Rensselaer Schuyler raised eight children in their Albany Home. Throughout the Schuyler family occupancy from 1763–1804, the mansion was the site of military strategizing, political hobnobbing, elegant social afairs, and an active family life. Enjoy a guided tour of the mansion as well as an orientation exhibition in the Visitor Center. After our tour of the Schuyler’s home, enjoy a bufet lunch at the Albany Pump Station.

After lunch, we continue our journey to the Albany Institute of History & Art to see the exhibition The Schuyler Sisters and their Circle. Clothing, decorative arts, portraits, and manuscripts tell the stories of the Schuyler women, Catherine Van Rensselaer Schuyler and her daughters, Angelica Schuyler Church, Elizabeth (Eliza) Schuyler Hamilton, and Margaret (Peggy) Schuyler Van Rensselaer, and how they witnessed history unfold. The exhibition focuses not only on their genteel lives, but also on their roles as mothers, social managers, businesswomen, and revolutionaries. Eliza’s wedding to Alexander Hamilton took place in the house in 1780 and their marriage gave her a front row seat to events that shaped the country in the years following the revolution. Angelica’s life abroad introduced her to prominent figures of the time; including Thomas Jeferson and artist John Trumbull. The Albany Institute has secured a loan of the rarely exhibited John Trumbull portrait of Angelica Schuyler Church from a private collection and loans from the Metropolitan Museum of Art among others. After a guided tour of The Schuyler Sisters and their Circle, there will be time on your own to explore other exhibitions. 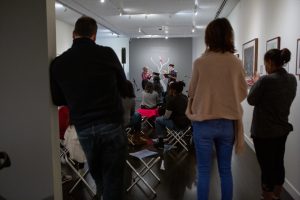 This tour is canceled. In response to the COVID-19 outbreak, all programs are canceled until further notice. The museum is actively reviewing our public programming schedule in line with state and local guidance. Learn more[...]
View Calendar
Add