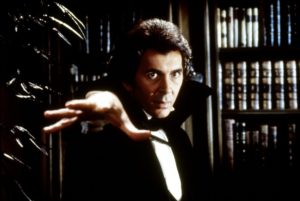 A 1977 Broadway revival of Dracula, with sets designed by Edward Gorey and starring Frank Langella, won the Tony Award for Best Revival. That show led to the production of this film version, also starring Langella.

In 1913, the charming, seductive and sinister vampire Count Dracula travels to England in search of an immortal bride.

Free with admission to Art After Dark: Gorey’s Worlds.

One thought on “Film: Dracula”