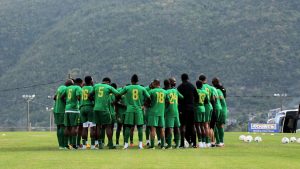 Preceded at 1:15pm by a tour of Afrocosmologies. Free with film admission.
Producer Sara Nodjoumi will be present for the screening.

Plagued with one of the highest murder rates in the world, Jamaica tries to inspire its people by qualifying their national soccer team—the “Reggae Boyz”—for the 2014 World Cup. When their efforts start to fall short, a colorful German coach enters the scene and forms an unlikely alliance with legendary reggae musicians and a Rastafarian factory worker to unite Jamaica beyond the soccer pitch.