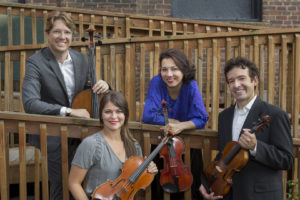 This program focuses on Bela Bartok’s Sixth String Quartet, written in 1939. In addition to his mother’s ill health, Bartok was at the time coping with feelings of betrayal resulting in part from Hungary signing a non-aggression agreement with Nazi Germany in 1937. As part of the pact, Hungary annexed parts of Czechoslovakia in 1938 following the German invasion.

The Sixth Quartet is centered on a recurring theme marked “Mesto,” which means “melancholy, or “sad,” juxtaposed with fragmented parodies of traditional Hungarian music. Music of Bartok’s contemporaries—those who used elements of Surrealism as well as folkflorist and other related techniques—will also be featured.