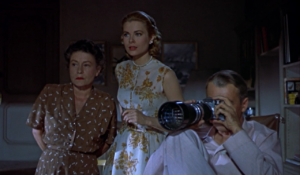 Photographers in Film Series: Directors have long featured photographers as interesting protagonists in fictional films. This series of five movies—in which one of the characters is a photographer—complements the exhibition The Thrill of the Chase: The Wagstaff Collection of Photographs at the J. Paul Getty Museum.

Rear Window
A wheelchair-bound photographer spies on his neighbors and becomes convinced that one of them has committed murder.