Celebrate the special exhibition Frederic Church: A Painter’s Pilgrimage at the Under the Stars Film Series. Each of the four featured films are set in locations visited by the famed Hudson River School artist. 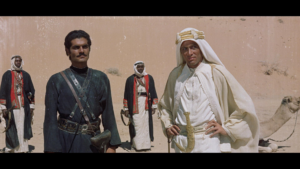 LAWRENCE OF ARABIA
The story of T.E. Lawrence, the English officer who successfully united and led the diverse, often warring, Arab tribes during World War I in order to fight the Turks.

Film Tickets:
$9 Regular Admission
$8 Seniors (62+) and Students with ID
FREE for Museum Members and Wadsworth Welcome cardholders
Tickets are available for purchase at the door.

Films begin at sundown (approximately 8:15 pm). Please note that portable chairs and coolers are prohibited. The program will move indoors during inclement weather.

One thought on “Under the Stars Film Series: Lawrence of Arabia (Entire film)”