Mark Bradford (American, born 1961) grew up in South Central Los Angeles, where the everyday realities of the local community and urban landscape inform his racially and politically charged work. Known for his tactile, map-like collage paintings, Bradford’s trademark monumental, mixed-media abstractions layer string and advertising posters stripped from the streets of his notoriously gritty neighborhood, where he maintains his studio.

In his work, the layered posters are largely painted over, but offer glimpses of texts that betray the area’s problematic social and economic issues. Ads for bail bonds businesses, money-cashing stores, and paternity- and disease-testing clinics target and prey upon the grim realities of the tough, poor, inner-city community. These social and political interests intrinsic to Bradford’s “post-black” work are symbolically represented, veiled in abstraction. 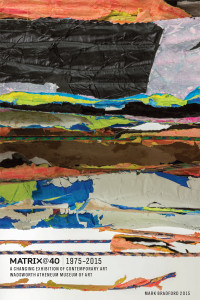 For Bradford’s MATRIX project, he created a site-specific wall drawing inspired by Sol LeWitt, the conceptual artist and Hartford native who is the founder of the “wall drawing” art form. (There are four Sol LeWitt wall drawings currently on view in the museum.)

Along the 60-foot wall in MATRIX’s Bunce Gallery, Bradford applied dense layers of vibrantly colored paper, paint, and rope, which he then sanded, peeled, stripped, and cut away from the wall to create a vivid and textured composition.

Akin to an excavation, Bradford’s installation could be read as a metaphor for 40 years (or layers) of MATRIX history at the museum. The wall drawing was accompanied by two recent “pull paintings” by the artist, a new technique he developed through the process of making MATRIX wall drawing tests in the studio.

Bradford also designed a poster to celebrate the 40th anniversary year of MATRIX in 2015, a fitting commemoration given that the program’s inaugural MATRIX poster was designed by Sol LeWitt, published in 1975.

Exhibition Credit
The MATRIX program is generously supported in part by Jeffrey G. Marsted and Marcia Reid Marsted as well as the current and founding members of the Wadsworth Atheneum Museum of Art’s Contemporary Coalition. Support for the Wadsworth Atheneum is provided in part by the Greater Hartford Arts Council’s United Arts Campaign and the Department of Economic and Community Development, which also receives support from the National Endowment for the Arts, a federal agency.

This tour is canceled. In response to the COVID-19 outbreak, all programs are canceled until further notice. The museum is actively reviewing our public programming schedule in line with state and local guidance. Learn more[...]
View Calendar
Add