Utamaro and the Lure of Japan celebrated rarely exhibited Japanese art at the Wadsworth Atheneum. With more than 50 paintings, prints, textiles, porcelain, and armaments taken from the Atheneum’s 1,000-object collection of Japanese art, the exhibition fully explored for the first time the depths of the museum’s holdings in this area.

At the center of the exhibition lay the reunion of two monumental scroll paintings by Kitagawa Utamaro (1753-1806): the Wadsworth Atheneum’s own Cherry Blossoms at Yoshiwara and its recently re-discovered companion Fukagawa in the Snow from the Okada Museum in Hakone, Japan. Side by side these paintings, which are considered Utamaro’s most ambitious works, offered visitors a renewed assessment of his art and reaffirmed his mastery. Cherry Blossoms at Yoshiwara is rarely exhibited, and together with its counterpart provided a unique window into Japan during the Edo period (1615-1868).

Kitagawa Utamaro was one of Japan’s greatest artists of “ukiyo-e”—pictures that depicted the “floating world” of ephemeral everyday life, especially the pleasures of love and entertainment, in Edo (now Tokyo) from the early 18th through the mid-19th century. He is known for his portraits of beautiful women, and in the two monumental paintings included in the exhibition specifically celebrate the courtesans who lived in the famous pleasure districts of the time.

The first record of Utamaro’s Snow and Flowers being displayed together is by a wealthy merchant of the Zenno family at Jogan-ji Temple, Tochigi Prefecture, in 1879 when they were shown with a third monumental work, Moon at Shinagawa or Moonlight Revelry at Dozo Sagami (c. 1788, now owned by the Freer Gallery of Art in Washington, D.C.). The last time Cherry Blossoms at Yoshiwara was seen by an international audience was in 1995, when it opened the groundbreaking exhibition The Passionate Art of Kitagawa Utamaro at the British Museum in London and the Chiba City Museum of Art.

TAP Mobile Tour
Use your smartphone (or borrow an iPod from the Information Desk) to access the museum’s free WiFi and take the Utamaro and the Lure of Japan mobile tour. Look for the tour icon on the wall labels, and enter the number to hear new perspectives on selected objects in this exhibition.

The Lure of Japan Film Series: Contemporary Japanese Cinema
After the Storm (Umi Yori Mo Mada Fukaku)
Shall We Dance? (Shall We Dansu?)
Our Little Sister (Umimachi Diary)
Creepy (Kurîpî: Itsuwari No Rinjin)
Sweet Bean (An)

The Lure of Japan Film Series: The World of Geisha and Courtesans
Utamaro and His Five Women (Utamaro o Meguru Gonin No Onna)
A Geisha (Gion Bayashi)
The Sea is Watching (Umi Wa Miteita)
Memoirs of a Geisha
Sisters of the Gion (Gion No Shimai)
The Life of Oharu (Saikaku Ichidai Onna) 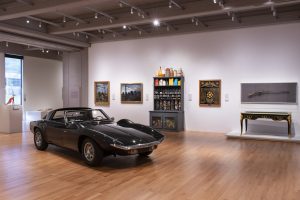 A docent guided tour of the exhibition Made in Connecticut. Availability is limited to 8 participants and advance registration is required. Museum entry is limited at this time to guided groups only and visitors must remain with[...]
2:00 pm Holiday Music: Petra Jenkinson
Holiday Music: Petra Jenkinson
Nov 29 @ 2:00 pm – 3:00 pm
Petra Jenkinson (lute) performs live music in the galleries. Museum ticket required. No seating will be available and visitors will be required to observe gallery capacity limits
View Calendar
Add