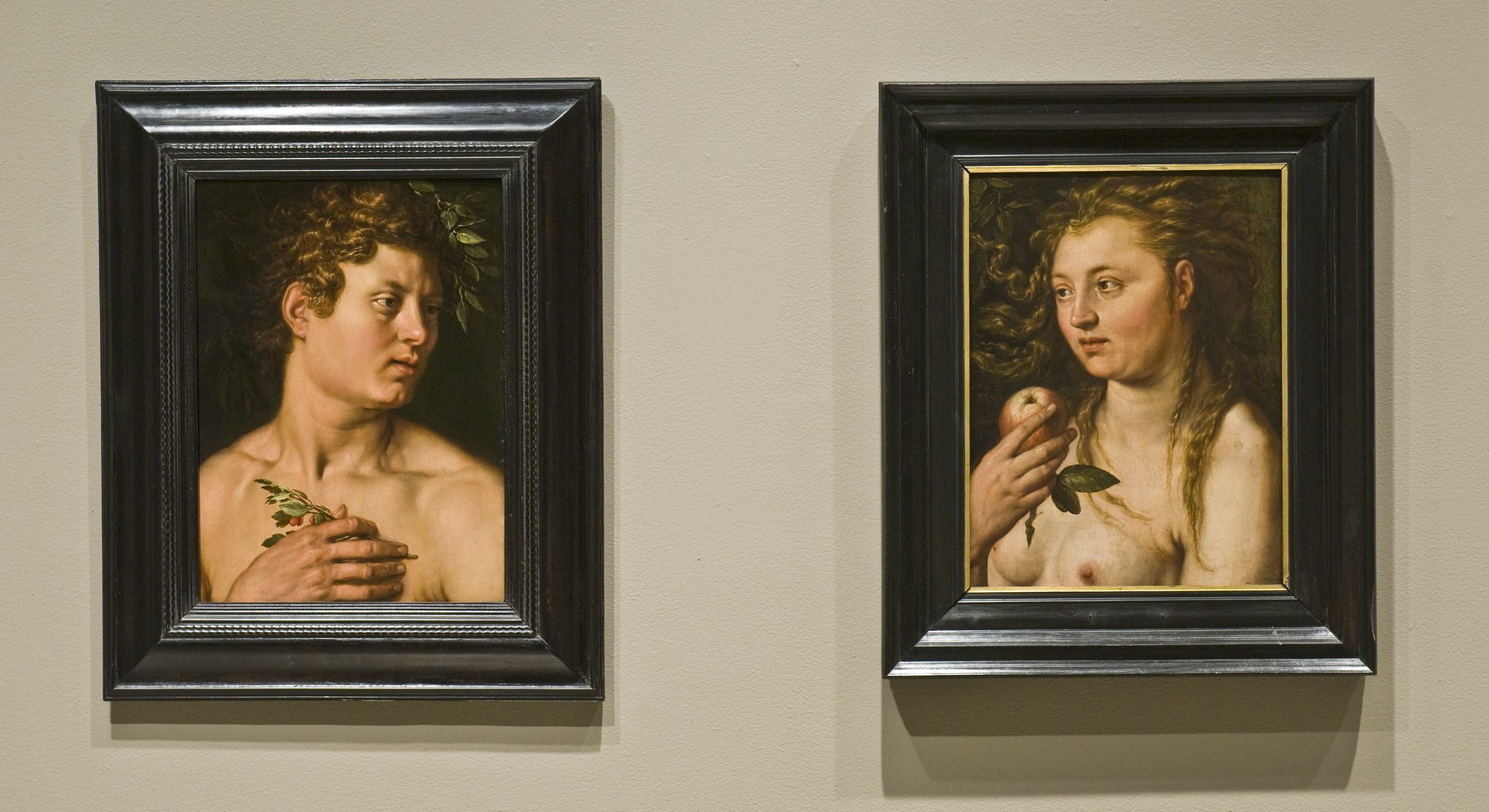 Shortly after the Wadsworth acquired its painting of Adam by Hendrick Goltzius, it was identified as a companion to the painting of Eve by the same artist, in the collections of the Musée des Beaux-Arts in Strasbourg, France. The pair were reunited, possibly for the first time in a century, in the 2010 exhibition Reunited Masterpieces: From Adam and Eve to George and Martha, at the Wadsworth. The exhibition was sponsored by FRAME, the French American Museum Exchange, which has also sponsored this special digital reunion of the socially distant paintings.

These portraits of the biblical figures Adam and Eve, the first man and woman mentioned in the Bible, were painted by Hendrick Goltzius (1558–1617), a German artist, who trained and worked in the Netherlands. Both works of art have identical dimensions, bear the artist’s initials, and similar markings on their backings—an “NN,” possibly the signature of one of the owners of the pair of paintings. Adam also bears the date of 1613, four years before Goltzius’ death, and has a red wax seal with the coat-of-arms of the Huchet de Cintre family, an aristocratic family that flourished in the nineteenth century around the Brittany region in France, and had likely owned the painting at one time.

Many of Goltzius’ contemporaries and mentors, including the German artist Albrecht Dürer (1471–1528), depicted Adam and Eve in full-length nudity enveloped by the lush flora and fauna, and a menagerie of animals described in the Garden of Eden. In his Adam and Eve, Goltzius abandons the Garden of Eden. He crops the figures at the torso and sets them against a dark background. In focusing on Adam’s distinct facial expression and fleshy features, Goltzius prods the viewer to contemplate a momentous episode of biblical history. Something outside of the painting grips Adam’s attention, forcing his head to turn dramatically to the right. With his lips opening as though he is about to speak, or learn to speak, a furrowed brow, and swath of light gently brushing across Adam’s cheek, the artist signals the innerworkings of a powerful awakening.

If we follow Adam’s gaze beyond the frame, we would be led directly to the apple offered up by Eve in the Strasbourg museum’s pendant. Together, the paintings represent the Temptation of Adam from the Book of Genesis. Goltzius captures the moment before Adam disobeys the orders from above admonishing him not to eat fruit from the Tree of Life. Rather than depicting the punitive chain of events set off by Adam’s surrender to temptation and his loss of innocence—shame at nudity, deceptive behavior towards God, and expulsion from the paradisiacal Eden—Goltzius paints the moment of decision that triggers the Original Sin, determines the fate of humans, and drives the course of biblical history. 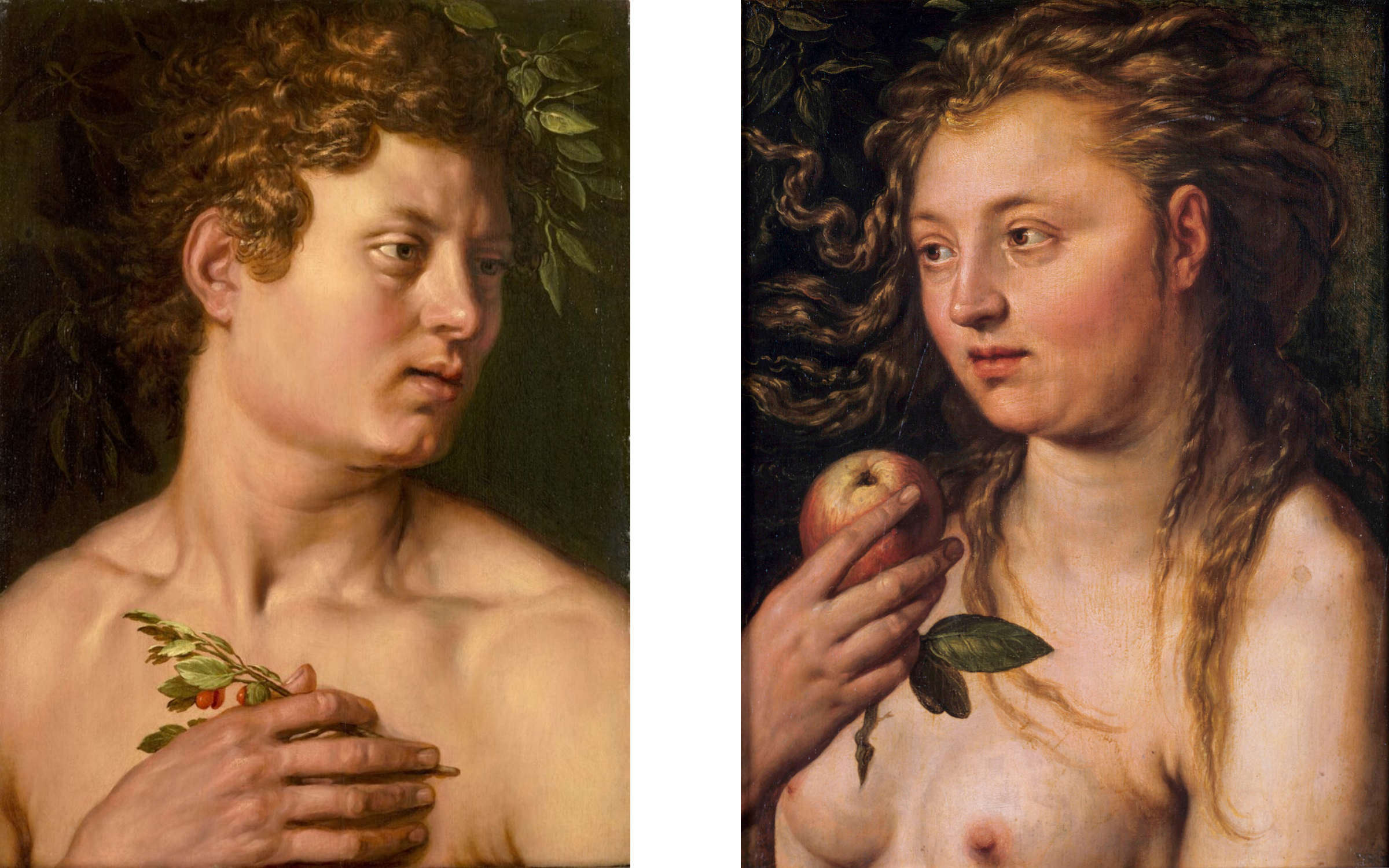 Goltzius offers just a hint of the dénouement that follows Adam’s temptation in the shoot of hawthorn that Adam holds against his chest—a symbol of the branches used to fashion Christ’s crown of thorns before he was flagellated and Crucified by his oppressors. With the sprig of hawthorn, Adam demonstrates that he is a precursor of Christ in the Old Testament. The hawthorn permits Goltzius to span the course of biblical history, from the fruit that led to the Fall of Man to the hawthorn that led to Christ’s suffering and eventual restoration. The laurel that triumphantly crowns Adam’s head of curls points to the salvation that would tie the stories together across spiritual time.

With only close-up bust portraits and a few props and gestures, Goltzius demonstrates his powers as a storyteller through the complex double portrait of the first man and woman as described in the Bible. Though framed separately, Adam and Eve complete a narrative, reminiscent of the hinged diptychs—two panels that close to protect a devotional image and open like a book to reveal separate pictures that impart a sacred theme or story. By dividing Adam and Eve into separate panels linked by related motifs, Goltzius creates a sense of the disruptions to spiritual time and narrative. The images remind us that artists tend not only to perfect the techniques of their adapted media and formal style, but that they actively conceptualize ways to convey narrative and emotion visually. 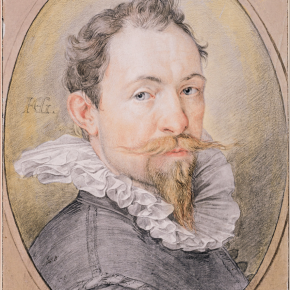 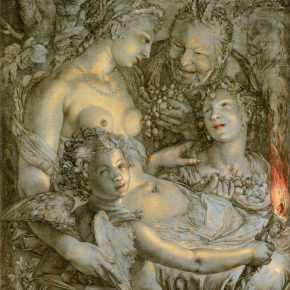 Largely self-trained, Goltzius replicated many of the techniques and signature styles of the artists he studied to teach himself how to draw and paint. Goltzius’ versatility and his adeptness in a range of media and forms was noted by his contemporaries. This self-portrait in chalk, ink, and watercolor demonstrates his penchant for integrating multiple types of media in one work. As a result of his ability to adapt a range of artistic techniques and styles, Karel van Mander, one of the first biographers of Northern European artists, referred to his friend Goltzius as the “Netherlandish Proteus.”

Before he took up painting in the seventeenth century, Goltzius made a name for himself as a printmaker and draughtsman, generating delicate and detailed pen drawings that reveal an astonishing command of the ink on the page. The obsessive hatch marks and delicate washes in his works on paper create depths that convey a sculptural, lifelike quality that appealed to collectors and artists in training. 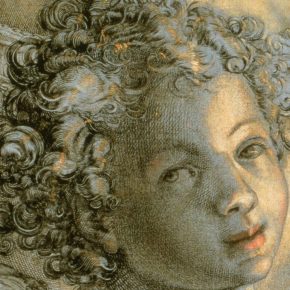 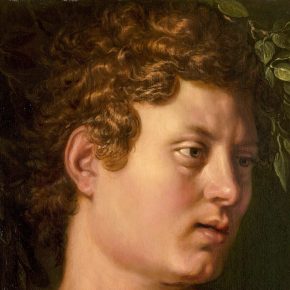 When Goltzius took up painting almost exclusively around 1600, he asserted a similar control over his brush. Goltzius’ control is evident in the fine wisps of Adam’s eyebrows and individual strands of Adam’s hair that contrast with the looser and wilder curls receding into the shadows of the tree. Goltzius experimented with transferring the effects of the gold washes from his earlier drawings  into the heavier oil paints he used to render Adam and Eve. The highlights in Adam’s hair show that Goltzius was concerned with locating a source of light. In these lighter hues and tonal contrasts, Goltzius exposes the texture and form of the brushstroke and how successful he was at rendering a fleshy three-dimensional figure. 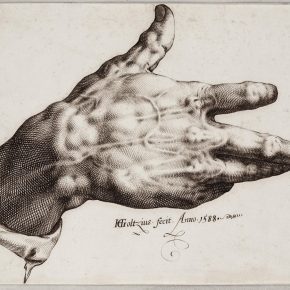 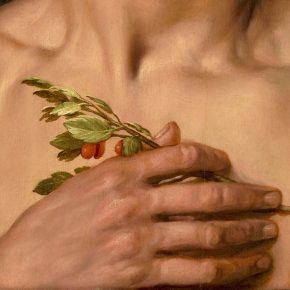 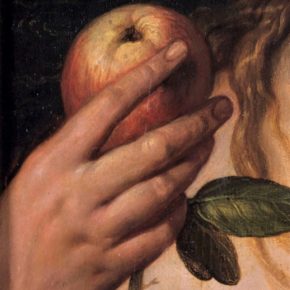 Given that Goltzius suffered a childhood accident that left him with a disfigured hand, his lively and meticulous work is impressive. The prominently rendered hand became Goltzius’ artistic signature and the expression of an abiding attachment to his calling as an artist. In the painting of Adam in Hartford and Eve in Strasbourg, Goltzius placed each figure’s hand within the frame to show signs of their biblical identities, but the fingers of each hand are deliberately spaced. Goltzius seems to have modeled the hands of Adam and Eve after his own, which he often held out before him to study, adapting his fused and painfully twisted fingers into more perfect versions.

In doing so, Goltzius seems to have embodied van Mander’s belief that artists should not merely imitate the forms they saw in nature, but they should perfect nature. Goltzius’ reimagined hands in the portraits of Adam and Eve suggest that the artist absorbed his biographer’s ideas into his work.

These projects are made possible by a grant from the French American Museum Exchange (FRAME). 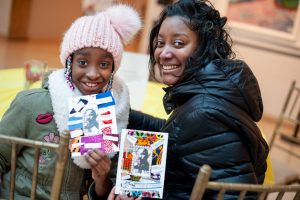