Gothic to Goth: Romantic Era Fashion & Its Legacy was the first exhibition to fully explore the Romantic era as a formative period in costume history. Presenting historic garments alongside literary works, paintings, prints, and decorative arts, the exhibition examined how European fashions from the Medieval, Renaissance, and Baroque eras influenced and inspired new styles created between 1810 and 1860. 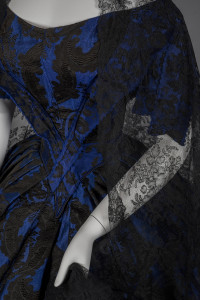 Gothic to Goth illustrated how early nineteenth century costume—just like fine and decorative art, architecture, interior design, literature, and music—moved away from the order and rationality of the previous half-century to embrace imagination and emotion, originality and vision, and individuality and subjectivity as guiding principles. The exhibition culminated with a look at recent Goth and Steampunk fashions, revealing their roots in the rich imagination and aesthetic of Romanticism.

Publication
A 128-page, full-color illustrated catalogue, including an extended essay by Bassett, accompanied the exhibition.

Gothic to Goth Tours
Join a docent for a tour of Gothic to Goth: Romantic Era Fashion & Its Legacy Saturdays & Sundays at 2:30 pm from March 5, 2016–July 10, 2016. Tours are free with museum admission and meet by the Museum Shop.

Mobile Tour
Use your smartphone (or borrow an iPod from the Information Desk) to access the museum’s free WiFi and take the Gothic to Goth Mobile Tour. Look for the tour icon on the wall labels, and enter the number to hear new perspectives on selected objects in this exhibition.