New York artist Mark Dion (American, born 1961) attended Hartford Art School in the early 1980s and, as a young artist, found inspiration and delight in the Wadsworth Atheneum’s collection. Dion has returned to Hartford many times over the years and continues to be a presence at the Wadsworth Atheneum. In 2006, the museum acquired Dion’s Providence Cabinet (2001) – a curiosity cabinet of cultural artifacts collected from one of three New England Digs– for the collection. Since 1991, the museum has also developed an impressive collection of Dion’s works on paper. 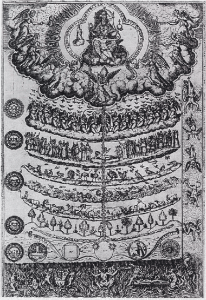 1579 drawing of the Great Chain of Being from Didacus Valades, Rhetorica Christiana

For his MATRIX project, Dion combined the museum’s collection with his practice of investigating the intersection of art and the history of science, applying proto-scientific systems with museum practices. He developed a hierarchical chain of living creatures to create a Wadsworth-specific version of The Great Chain of Being (based on Greek philosopher Aristotle’s ancient model) through details of paintings, sculptures and decorative arts found in the museum’s collection.

The concept that all living things arranged in a continuous gradation from the simplest living form to the most noble, is one of the most dominant ideas in the Western intellectual tradition, and one of the most absurd and destructive as it sets up a class system determined by those in power. Dion took on this essential foundational concept from the history of consciousness with humor and criticality; His project ridiculed the great chain rather than celebrating it.

From the least important form of life to the greatest, Dion’s Great Chain included invertebrates and arthropods, fish and reptiles, birds and dogs, mammals and humans, monsters and angels, and, finally, the Devil and God. The series of 125 photographs depicted details of various masterpieces from the walls, pedestals, and storage vaults of the museum. Dion’s complete photographic series has been acquired by the museum for the permanent collection.

In MATRIX 173, the Great Chain was presented in order—following the classical version—in horizontal and vertical lines throughout the gallery. Shown as circular artistic details, removed from their original contexts in overall compositions, the isolated creatures stimulated visitors’ curiosities, driving them through the museum in the interest of finding the original source works. Dion’s Great Chain installation benefited from the quality and breadth of the collection, but was also circumscribed by its limits. Dion’s eclectic selection revealed different forms and styles of art making, which is emblematic of the diversity of the Wadsworth Atheneum Museum of Art’s collection.

This exhibition was originally scheduled to conclude January 3, 2016 and was extended to May 1, 2016.

Exhibition Credit
The MATRIX program is generously supported in part by Jeffrey G. Marsted and Marcia Reid Marsted as well as the current and founding members of the Wadsworth Atheneum Museum of Art’s Contemporary Coalition. Support for the Wadsworth Atheneum is provided in part by the Greater Hartford Arts Council’s United Arts Campaign and the Department of Economic and Community Development, which also receives support from the National Endowment for the Arts, a federal agency.

Curator Linda Roth discusses fascinating changes to food culture that took hold before the French Revolution in a tour of the distinct objects and works of art that mark those changes and shed light on[...]
Sep
30
Wed
11:30 am Highlights Tour
Highlights Tour
Sep 30 @ 11:30 am – 12:30 pm

A docent guided tour of the exhibition Savor: A Revolution in Food Culture. Availability is limited to 4 participants and advance registration is required. Museum entry is limited at this time to guided groups only and visitors[...]
View Calendar
Add