Installed in 1893, Enoch Woods’s Nathan Hale was the first work of art to be placed on the Wadsworth’s grounds. Hale is recognized as Connecticut’s state hero and a national patriotic symbol for his role as a spy, reporting on the movements of British troops, during the Revolutionary War. He was captured and executed on September 22, 1776. A witness to his execution purportedly heard him proclaim, “I only regret that I have but one life to lose for my country.” Created for a state-run sculpture competition, this memorial of the twenty-one-year-old Hale was made by Hartford local, Enoch Woods.

Atmospheric pollution took its toll on the sculpture’s original surface and its granite base after spending nearly 130 years outdoors. The green and black streaks are evidence of corrosion on the metal and discoloration on the stone. The sculpture also shifted slightly toward one side of the base. In the summer of 2020, a major conservation treatment and restoration was done. A protective coating colored to match the original appearance was applied to the sculpture to protect the surface, and the statue was realigned. Francis Miller, directing conservator of Conserve ART lead the conservation treatment, in collaboration with the Wadsworth’s objects conservator, Casey Mallinckrodt.

Click the images below to see views of Nathan Hale over time. 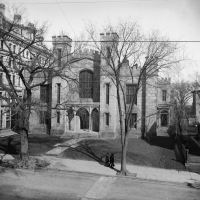 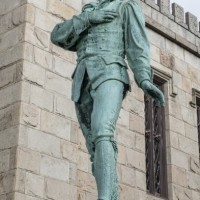 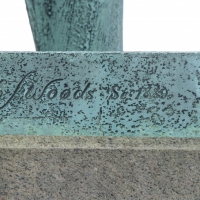