A critical turn in subjects and character materialized in the drawings and sculptures of the Scottish-born artist William Turnbull around 1953-1955. As an art student in post-WWII London and Paris, Turnbull relied on the use of lines in his sculptures made of plaster over wire. Highly abstracted they represented objects in space, stripped to their essential forms. As he moved away from the linear, his work became increasingly tactile and voluminous. He embraced the possibilities of cast metal, using color, shadow, and texture to create both mass and negative space. His first sculptures made in bronze were heads, masks, and horses. The eight drawings on view in this temporary installation demonstrate the intensity of his investigation of these figural themes. He developed his own artistic language evoking primeval idol forms from ancient Europe and non-Western cultures.

During the course of his career Turnbull’s work made other major shifts but he returned full force to making sculptures of cast metal in the late 1970s. Large Horse (1990), now on view outside the museum’s Main Street entrance is his largest bronze and was made at the apex of his mastery of form, color, and texture. 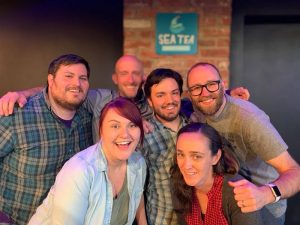 Registering to vote has never been so entertaining. On the heels of National Voter Registration Day, take an unscripted and unfiltered lunchtime break to watch the Sea Tea Improv troupe espouse the importance of exercising your[...]
Sep
26
Sat
11:00 am Highlights Tour
Highlights Tour
Sep 26 @ 11:00 am – 12:00 pm